Only five months after creating cross-functional teams Travelstart, a South African travel booking website, had a change in strategy and needed to rethink their team structure.

From previous hackathons the company had experience with self-selection and liked the process, empowerment and outcomes. But they had never used self-selection to form lasting teams and knew they needed a structured approach to make this work. So, when internal Agile coach Bevan Williams was recommended our book “Creating Great Teams - How Self-Selection Lets People Excel” he knew he had an excellent starting point.

However, he faced one major challenge: Teams at Travelstart spanned two continents and included people from a variety of locations. 21 of Travelstart’s developers were based in Cape Town and the remaining nine in Taiwan. And as it was impossible to gather everyone in the same location for the self-selection event, Bevan had to tweak our self-selection process to accomodate for remote participants. 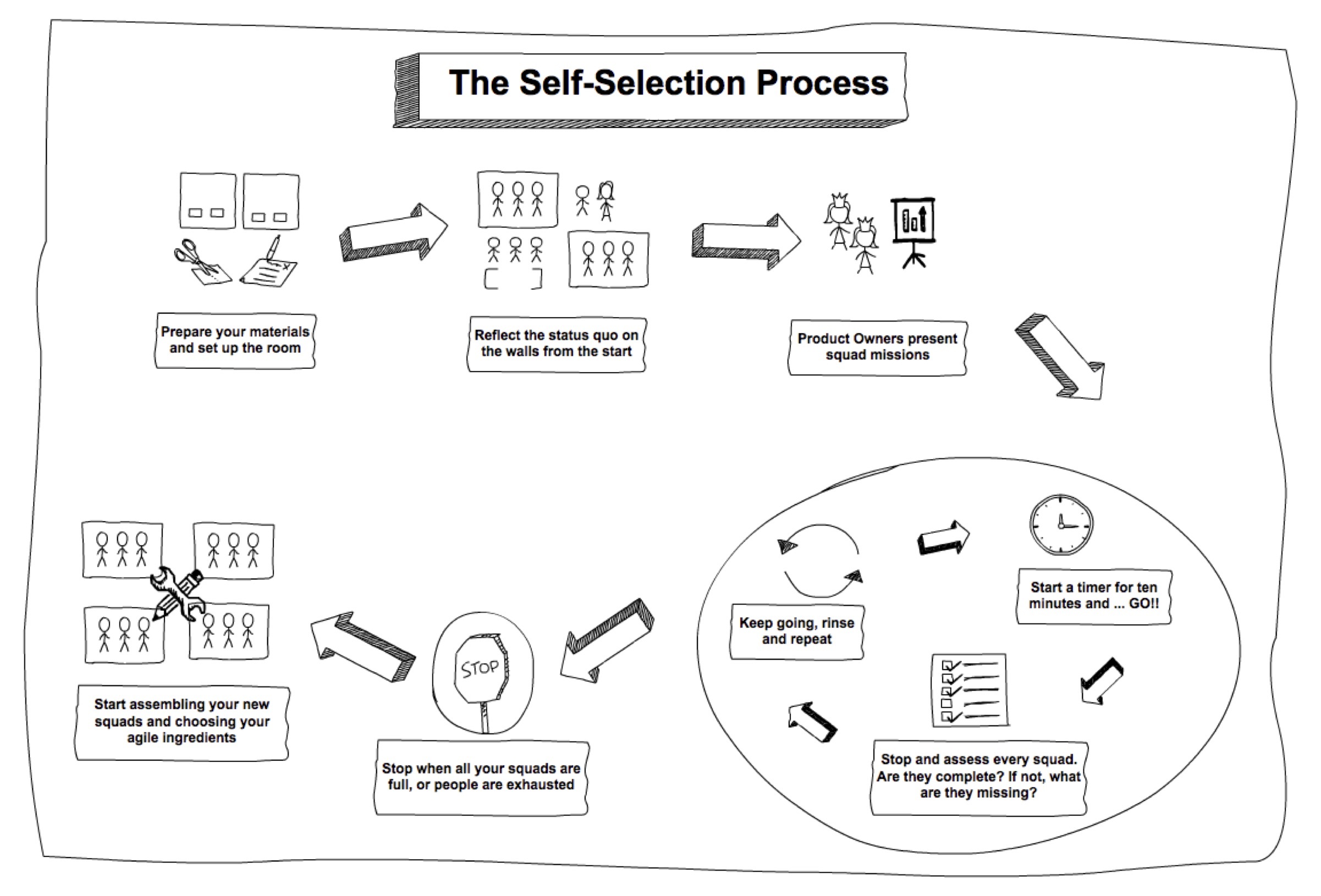 Here is Travelstart’s successful approach to self-selection with distributed teams: Google Drawings - An example of a team board. Right: The virtual space (If you like a copy use this google doc)

A dry-run
Using the virtual space Bevan ran a brief workshop with the management team. The purpose of this workshop was threefold:

In “Creating Great Teams” we provide a simple and easy to follow step-by-step process which Bevan decided to follow:

With a remote office in Taiwan and the bulk of participants in their head office in Cape Town Travelstart needed to set up 3 spaces. One for each location and one shared virtual space (Google Drawings).

Starting out each product owner introduced their team’s mission, constraints and skills needed. The presentations were streamed from Cape Town via Zoom.

Team selection was done in five minute iterations. People would pick a team by either physically moving to a product owner and team area (local) or by dragging their name into the desired team space on Google Drawings (remote).

After each five minute iteration the teams had 10 minutes to individually assess their status and raise any concerns. Teams with remote members held their discussions in assigned Zoom breakaway rooms. At the end of discussion time the product owners made sure to to update the team status in Google Drawing and closed down the Zoom breakaway rooms.

After the 3rd round only two out of ten teams were not fully formed. One team was missing a specific skill and another faced an issue with some people not wanting to work with a particular person (This had become obvious when the person moved into a team and others moved out.)

Overall, having eight out of ten teams fully formed was an extremely successful outcome.

Feedback
Anonymous feedback collected the day after was very positive. People especially liked the transparency self-selection had provided. There were a few concerns about the lack of skills across the organisation and about colleagues having to “give up” their first choice to create balanced teams. Two people felt uncomfortable with the event surfacing an interpersonal issue.

A month after the event participants were asked how they felt about their new teams: “On a scale of 1-5, rate how happy you are with the new team?”, and “What was the leading factor that drove your team choice?”.

The survey showed that most people were very happy or at least satisfied with their new teams. Most people based their team selection on growing technical skills, relationships and job security.

Team performance
In the weeks following the event excitement and energy levels were high. Within a week the first team was ready to kick off and once all teams were ready to go the Taiwanese colleagues came to Cape Town for team liftoff activities.

Six months later many of the teams still look the same. Some people have left the company, new people have joined and there was also a request to move teams. So, a few teams have changed but the impact wasn’t big enough to warrant another self-selection.

Bevan noted something interesting though about the teams that were still in their original formation. They were more self-organising, driven and happier and they exhibited most, if not all, the traits of high-performing teams.

What stood out was that some of these teams looked very different to the ones the management team had “created” in the dry-run before the self-selection So, while there were probably other factors influencing these teams’ success there is a clear correlation between self-selected teams and positive team performance.

2) Management won’t “get it right”. Management’s ideal team structure turned out to be quite different from what people chose during self-selection. Their “Plan B” guessed 21 out of 30 team placements. In this scenario nine people wouldn’t have ended up on the team of their choice. Now contrast this with only two people after the self-selection event!

3) Self-selection will radically change your team's culture. Self-selection wasn’t just an event - it became a culture in the spirit of which all subsequent decisions were made. Self-selected teams took full ownership of outcomes and wanted to be more involved in hiring, tooling, product and business decisions.